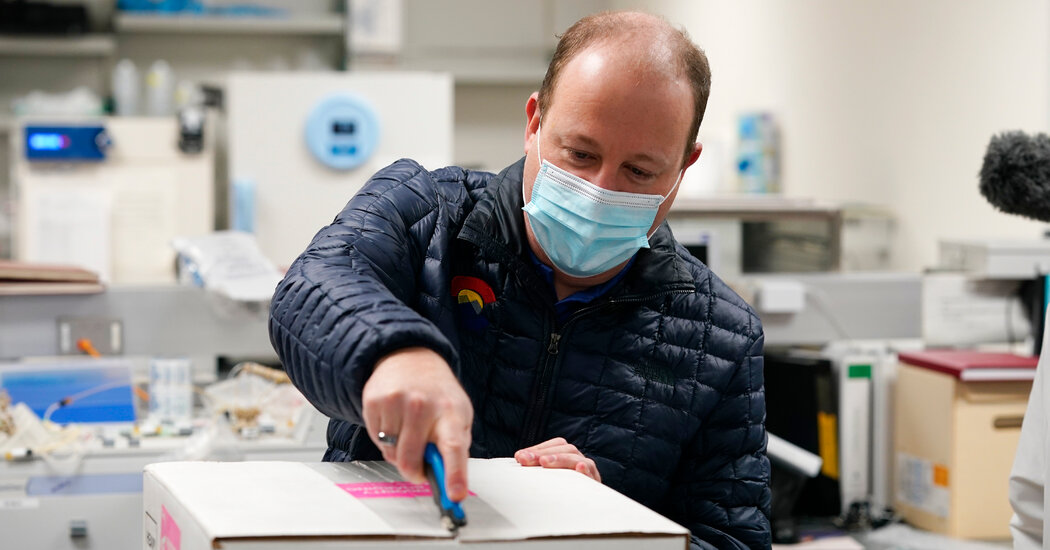 After a promise from the Trump administration that it would release a stockpile of reserved coronavirus vaccine doses, several states were expecting a huge boost in doses. Some followed federal guidance to expand eligibility to wider swaths of people.

But that promise turned out to be too good to be true — most of the stockpile had already been shipped out. And now those states are scrambling, finding themselves just as mired in the morass of the country’s beleaguered vaccine distribution as they were before.

Gov. Kate Brown of Oregon, expecting the additional doses, opened vaccine registration to people in the state 65 and older, as well as educators and child care providers. Now, she said in a news release, the state’s plan to start vaccinating all of its older residents will be delayed by two weeks.

The confusion began Tuesday, with a statement by Alex M. Azar II, the secretary of the health and human services department, who chided states for not efficiently using their vaccines and urged them to open up eligibility to people 65 and older, as well as to tens of millions of adults with medical conditions that put them at higher risk of dying from coronavirus infection.

“We are releasing the entire supply we have for order by the states, rather than holding second doses in physical reserves,” he said, adding that vaccine doses would no longer be stockpiled.

Several states then assumed that they would get an influx of new doses that could be used to vaccinate new people. Some, including New York, quickly followed the federal government’s advice and widened vaccine access, prompting a surge of interest — and confusion — as thousands of newly eligible people sought appointments to get vaccinated.

On Thursday, Oregon officials discovered that “there were no additional doses available” in the federal distribution system beyond what had been available before the Trump administration’s Tuesday announcement, the director of the Oregon Health Authority, Patrick M. Allen, wrote in a letter to Mr. Azar, which was posted by NBC News.

Mr. Allen and Ms. Brown spoke with an official from Operation Warp Speed, the federal government’s vaccine program, who “informed us there is no reserve of doses,” he wrote.

“This is extremely disturbing, and puts our plans to expand eligibility at grave risk,” Mr. Allen wrote. “Those plans were made on the basis of reliance on your statement about ‘releasing the entire supply’ you have in reserve.”

Governor Brown said on Twitter: “This is a deception on a national scale.”

On Friday, the public learned that the Trump administration had already been distributing all available doses since the end of December, after The Washington Post reported the news.

“Who’s going to be prosecuted for this?” Gov. Tim Walz of Minnesota asked at a news conference on Friday. Mr. Walz said he was “not sleeping” over concerns that Minnesotans would be unable to get their second doses.

Gov. Jared Polis of Colorado said his state would get 79,000 doses this week instead of the 210,000 he had been expecting.

“We should’ve known not to believe a word” from the Trump administration, Mr. Polis said.

Senior Trump administration officials told The New York Times on Friday that the reserved doses were already being distributed to states and that they were never intended to be used toward vaccinating additional people.

Shipments of eight to 12 million doses per week will be sent out over the next several weeks, a senior administration official said on Friday. Those shipments will be divided among those getting their first and second shots.

Daniel Larremore, an assistant professor at the BioFrontiers Institute at the University of Colorado, Boulder, said that for governors creating distribution plans, “having the sands constantly shifting beneath your feet makes it really hard to make those plans and get people lined up to get the vaccine.”

Federal, state and local officials have traded blame for the faulty rollout. Dr. Tom Frieden, the former director of the Centers for Disease Control and Prevention, said it had been “chaotic,” tweeting on Friday that the Trump administration’s current plan “seems to be pointing fingers at states.”

The “only route to success is a whole-of-government, whole-of-society approach,” he said. “If we’re divided, the virus will continue to conquer us.”