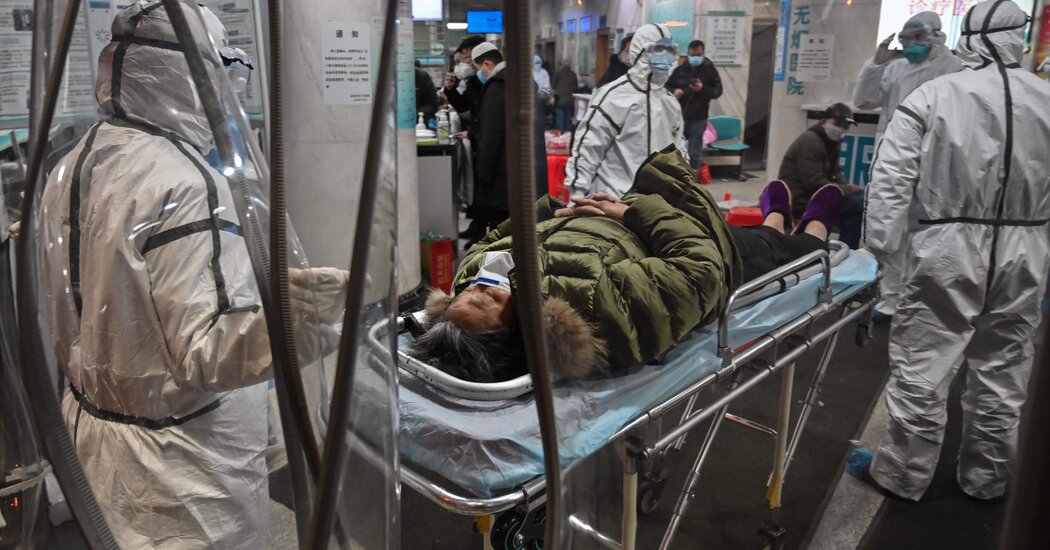 How the W.H.O. bowed to China

On a weekend in February, when the world still hoped the virus could be contained, a World Health Organization team arrived in Beijing to investigate a critical question: How did the coronavirus jump from animals to humans?

But what the team members did not know was that they would not be allowed to investigate the source at all. Against the advice of their emergency committee, W.H.O. leadership had quietly negotiated terms that sidelined their own experts. They would not question China’s initial response or even visit the live-animal market where the outbreak began.

Nine months and more than 1.1 million deaths later, there is still no transparent, independent investigation. China has impeded the effort, while W.H.O. leaders, if privately frustrated, have largely ceded control.

Details: Internal documents obtained by The Times and interviews with more than 50 public health officials, scientists and diplomats provide an inside look at the W.H.O.’s dealings with Beijing. China extracted concessions that helped it delay important research and avoid a potentially embarrassing review of the government’s early response to the outbreak.

Quotable: “Unfortunately, this has become a political investigation,” said Wang Linfa, an Australian virologist in Singapore. “Whatever they do is symbolic.”

Here are the latest updates and maps of the pandemic.

Anxiety and uncertainty in the U.S. election

Tuesday is Election Day in the U.S. More than 96 million Americans have already voted — making it likely that the total turnout will hit a record. Early voting has brought uncertainty to the presidential campaign.

Backers for both President Donald Trump and former Vice President Joe Biden see the split between early voters and Election-Day voters as partisan: Democrats in most states have made up a clear majority of early voters, while many Republicans are waiting to show up at the polls on Tuesday.

In the final stretch, Mr. Trump has amped up chaos at his rallies and claimed ballots should not be counted past election night, even though no state reports final results by midnight. Both candidates are focusing on Pennsylvania, which will be crucial.

Tension: The campaign is ending on an unsettling note. The final days have been marked by threats of violent skirmishes and street demonstrations. Store owners in some U.S. cities are putting plywood on their windows, anticipating unrest.

The numbers: The polls have showed Mr. Biden in the lead. Our polling reporter outlined what Mr. Trump would need to win — essentially, he writes, a polling error much larger than the one in 2016.

Follow our live broadcast of The Daily on Election Day from 4-8 p.m. Eastern at nytimes.com/thedaily and on The New York Times iPhone app.

Thailand has a history of coups. Is this time different?

For weeks now, student-led protesters across Thailand have taken to the streets, calling for a new Constitution with authority over the monarchy, and the resignation of Prime Minister Prayuth Chan-ocha, who led a military coup in 2014.

Return to order: Over nine decades, the Thai military has tried to oust elected governments about 30 times. At least a dozen of these coups have been successful. Whenever the generals launch a takeover, the refrain is the same: Thailand needs a return to order, without messy rallies or dissenting voices.

Military power: The Thai military is the country’s largest landowner, apart from the forestry bureau’s national park holdings. It has its own internal security apparatus that has brought thousands of dissenters to its military bases for enforced “attitude adjustment” sessions. It appoints all 250 members of the Senate.

Quotable: “I see a coup as not a bad thing,” said one prominent royalist who has publicly called for a military intervention.

If you have some time, this is worth it

Our high-tech home in space

It’s been 20 years since humans began living on the International Space Station. The outpost that orbits Earth about 240 miles above the planet was pitched as post-Cold War space cooperation between the United States and Russia. Japan, European countries and Canada later joined the missions, seen as key for future economic activity in space.

Our science reporters take stock of the space station’s 20 years. You can take a visual tour, read about key moments and scroll through our timeline.

Snapshot: Above, people wearing protective gear during the Pachali Bhairav festival in Kathmandu, Nepal, in October. Last year, Nepal attracted so many mountain climbers that hundreds of hikers snarled a trail to the top of Mount Everest. The pandemic has stopped all of that.

What we’re watching: The polar bear cam at the San Diego Zoo.

Now, a break from the news

Read: “The Best of Me,” by David Sedaris, is a must-read, our reviewer writes. “It will be a new experience, knowing that enough time has passed to find humor in the hardest parts of life.”

Do: During stressful times, knitting can bring calm and a sense of connection to the past and to family members far away.

For inspiration on what to read, cook, watch and do while staying at home, take a look at our At Home collection of ideas.

And now for the Back Story on …

The world is watching the U.S. election

American presidential elections always seize international attention, but this year is exceptional: President Trump has frayed nerves like few leaders in history. Our reporters looked at reactions and expectations around the world.

No country has watched the American election unfold with greater anger and grievance than China — and few have more at stake. U.S.-China relations are at their worst level in decades, but few officials appear to harbor hope that a defeat for Mr. Trump would usher in any improvement. Given Vice President Joe Biden’s “get tough on China” campaign rhetoric, they see him as a complicated challenge.

South Korea’s president, Moon Jae-in, has vocally encouraged Mr. Trump’s dealings with North Korea. But many South Koreans are weary of Mr. Trump’s flirtation with a dictator, and the public favors Mr. Biden by nearly four to one, polls show.

Australians are working out their worries by gambling on the outcome, with the odds tilting heavily in Mr. Biden’s favor.

Israel’s right-wing government has been showered with political favors by the Trump White House, and if it could vote, it would be one of the most Republican places on the globe.

In Ukraine, where Mr. Trump’s demand for political dirt on Mr. Biden got him impeached, some are worrying that in a close election he could press President Volodymyr Zelensky for another favor. Some feel vulnerable because Ukraine depends on U.S. political support.

Pro-Kremlin Russian commentators are depicting American democracy as rotten to the core and playing up the possibility of violence and chaos — with headlines like “Is America one step away from civil war?”

That’s it for this briefing. See you next time.

Thank you
To Theodore Kim and Jahaan Singh for the break from the news. You can reach the team at briefing@nytimes.com.

P.S.
• We’re listening to “The Daily.” Our latest episode is a guide to election night.
• Here’s our Mini Crossword, and a clue: Flannel shirt pattern (five letters). You can find all our puzzles here.
• Patrick Kingsley, our correspondent based in Berlin, is our next Jerusalem bureau chief.