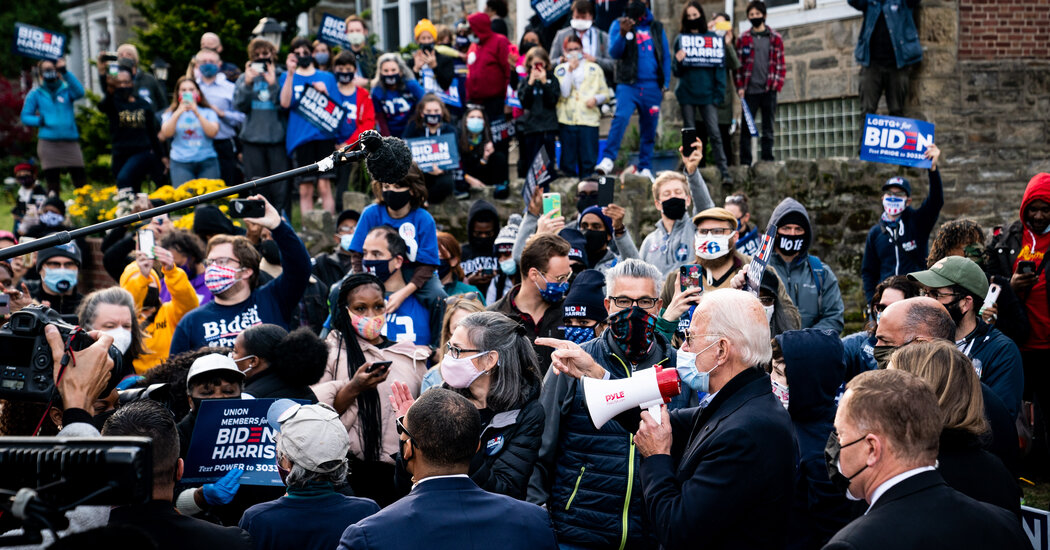 While President Trump had attempted to focus on anything other than the pandemic during the campaign, it remained the defining issue: More than 40 percent of voters said it was the most important issue deciding their vote, far more than any other issue.

Voters’ opinion of which was more important — containing the coronavirus or hustling to rebuild the economy — fell along starkly partisan lines, according to early exit polls released Tuesday. Those who viewed the pandemic as the most pressing issue favored Joseph R. Biden Jr. for president, while those who named the economy and jobs leaned toward re-electing President Trump.

Reflecting a pervasive pessimism, nearly two-thirds of voters said they believed the country was heading in the wrong direction — and those voters overwhelmingly picked Mr. Biden.

Of those who voted for Mr. Trump, roughly four in five called the virus at least somewhat under control, while even more Biden voters said it was “not at all under control.”

Those who reported that the pandemic had taken a personal toll tended to back Mr. Biden. More than a third of all voters said they or someone in their household had lost a job or income over the past eight months, and most of those voters favored Mr. Biden.

Far fewer said they knew someone who had died from the virus, but among those who did, the vast majority chose the former vice president.

For the first time, not one but two probability-based, scientifically sound voter surveys were conducted amid the election. The exit polls, conducted as usual by Edison Research on behalf of a consortium of news organizations, was carried out by phone with voters who had cast ballots early, and by in-person interviews at voting places.

The Associated Press also conducted its own voter survey, called VoteCast, using a panel of online respondents assembled by NORC, a research group based at the University of Chicago.

Both the A.P. and the Edison polls were conducted with over 10,000 respondents, allowing a high level of precision when looking at subgroups within the national electorate.