U.S. Election Is a High-Stakes Political Struggle. In Russia. 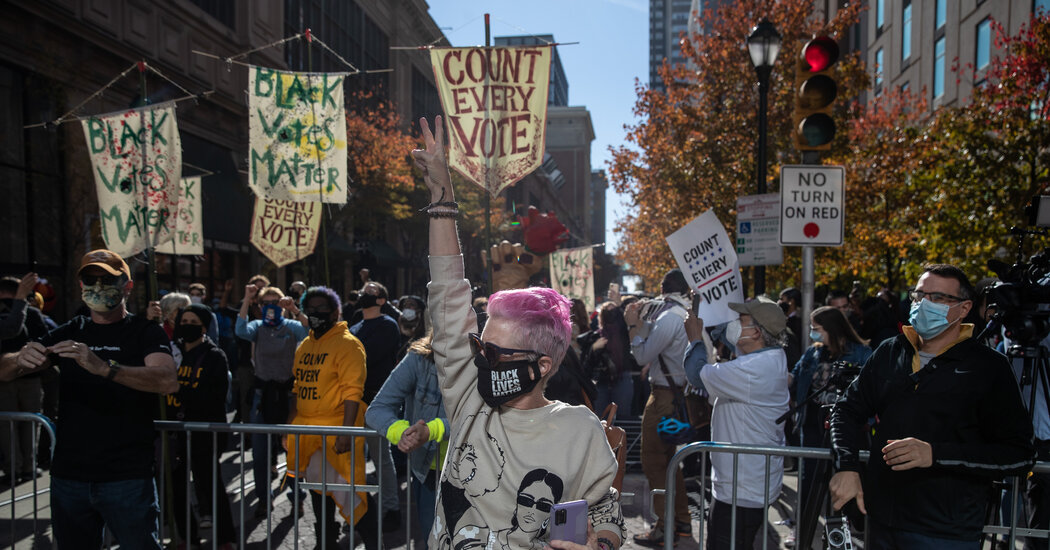 MOSCOW — Seven hours into Leonid Volkov’s election-night YouTube marathon, viewers waking up in Russia were asking who had won.

“We don’t know,” a bleary-eyed Mr. Volkov said. “This is what you call an unpredictable election.”

Mr. Volkov is a top aide to Aleksei A. Navalny, the Russian opposition leader, and his all-night livestream about the American presidential election departed from the Navalny team’s typical online fare about corrupt oligarchs and local officials trampling democratic principles.

In Russia, the drawn-out aftermath of America’s Election Day has become the focus of a domestic political struggle in its own right, feeding a debate over whether Russia’s tightly scripted political landscape has unique advantages over American democracy.

To defenders of President Vladimir V. Putin, President Trump’s false claims of widespread election fraud have emerged as perhaps the best proof yet that democracy is a recipe for disaster.

Mr. Putin’s opponents are countering with their own narrative: The sheer unpredictability and tinge of chaos surrounding the world’s most consequential election underscore the greatness of a free system.

“Compare this to the most shameful ‘elections’ that Putin and his clique put on for us,” another opposition politician, Gennadi V. Gudkov, wrote on Twitter Thursday, “with a result drawn up in advance by the crooks from the Central Election Commission on orders from the Kremlin!”

The stakes in how Russians interpret the American electoral process this year are high, and Mr. Putin’s allies know it. Pro-democracy activists in Russia and around the world have long worried that turmoil in the West — and Mr. Trump’s undermining of American institutions — could discredit liberal ideals in their countries.

“All this stuff, the criticism by Trump, de facto functions to justify Russian authoritarianism,” said Aleksandr V. Kynev, a Russian political scientist. “It all finds very fertile ground in Russia because we have mass distrust in our own elections.”

Russia is a democracy on paper, but Mr. Putin largely eliminated democratic freedoms early in his 20-year rule. The country still holds elections, with the opposition candidates generally handpicked by the authorities to provide a facade of choice. Only in very rare cases do they win.

But many Russians are interested in how democracy can work, and how a political battle really looks, Mr. Volkov said, explaining why he undertook his marathon YouTube broadcast. “For us,” he said, by way of contrast, “it’s a huge triumph when we manage to register a candidate.”

The Kremlin’s allies, however, saw this week’s election as an opportunity to cast Western democracy as prone to chaos, in contrast to the stability offered by Mr. Putin.

Margarita Simonyan, the editor of the state-run RT television network, posted on Twitter Wednesday night that the American election was “neither free nor fair.” Vladimir Solovyov, a prominent talk-show host, said the United States had “managed to deliver a crushing blow against what trust remained in the procedure of elections itself.”

Mr. Trump’s contentions of voter fraud allowed the Kremlin’s allies, who are used to hearing allegations of rigged elections from pro-Western opponents, to basically turn the tables.

On Russian state television, anchors and analysts commenting on the American election deployed the same terms the Russian opposition routinely uses to describe falsified elections at home. There was talk of “vbrosy,” or ballot stuffing, and the use of “administrative resources,” the common practice by rulers across the post-Soviet space to use the tools of government to win elections and hobble opponents.

“Even if Biden is declared the winner, Trump will have every reason and ability, including his notorious administrative resources, to dunk the Democrats in the mud in the most unbelievable way,” one pro-Kremlin pundit, Aleksei A. Mukhin, opined on the Rossiya-24 state-controlled news channel on Thursday.

The pattern of the vote count in Wisconsin, Michigan and Pennsylvania — with Mr. Trump taking the early lead, followed by Mr. Biden’s rapid gains from absentee ballots — led Mr. Putin’s allies to echo the accusations of vote stuffing that the opposition often makes in Russia and in Belarus.

“We’re seeing the Kyrgyzization of the American electoral system,” Mr. Morozov said. “The main pillar on which America has always relied has been put in question.”

The Kremlin said it would wait for “some kind of clarity” in the election results before commenting, but the Foreign Ministry leapt at the opportunity to criticize the United States with the same kind of language that some Russians believe Washington has long, and wrongly, lectured them with.

“With the opponents for the post of president running approximately equal to each other, the obvious faults of the American electoral system become clear,” the Foreign Ministry’s spokeswoman, Maria V. Zakharova, said. “This is partially explained by the archaic legal code and its ambiguity on key matters, as we have said more than once.”

But the images on Russian television of poll workers across America diligently counting ballots may have told their own story about how a democracy functions.

Critics of the Kremlin have next to no ability to use the television airwaves, so some tried to deploy social media to push back on the narrative of election fraud in America. Vladimir Milov, an adviser to Mr. Navalny, wrote on Facebook that the count of American mail-in ballots could be trusted — unlike in Russia, where remote voting is especially prone to falsification.

“This isn’t Russia, where they hide ballots in a safe at night that the election committee chairman has a key to,” Mr. Milov wrote.

Mr. Putin, for his part, won the right to run for two more six-year terms in a constitutional referendum this summer that was carefully orchestrated to deliver a win for him.

But if Mr. Putin chooses not to run again, he would lead a privileged existence unavailable even to a post-presidency Mr. Trump, whose company faces a civil investigation by New York’s attorney general.

A bill introduced in the Russian Parliament on Thursday would give ex-presidents lifetime immunity from prosecution.