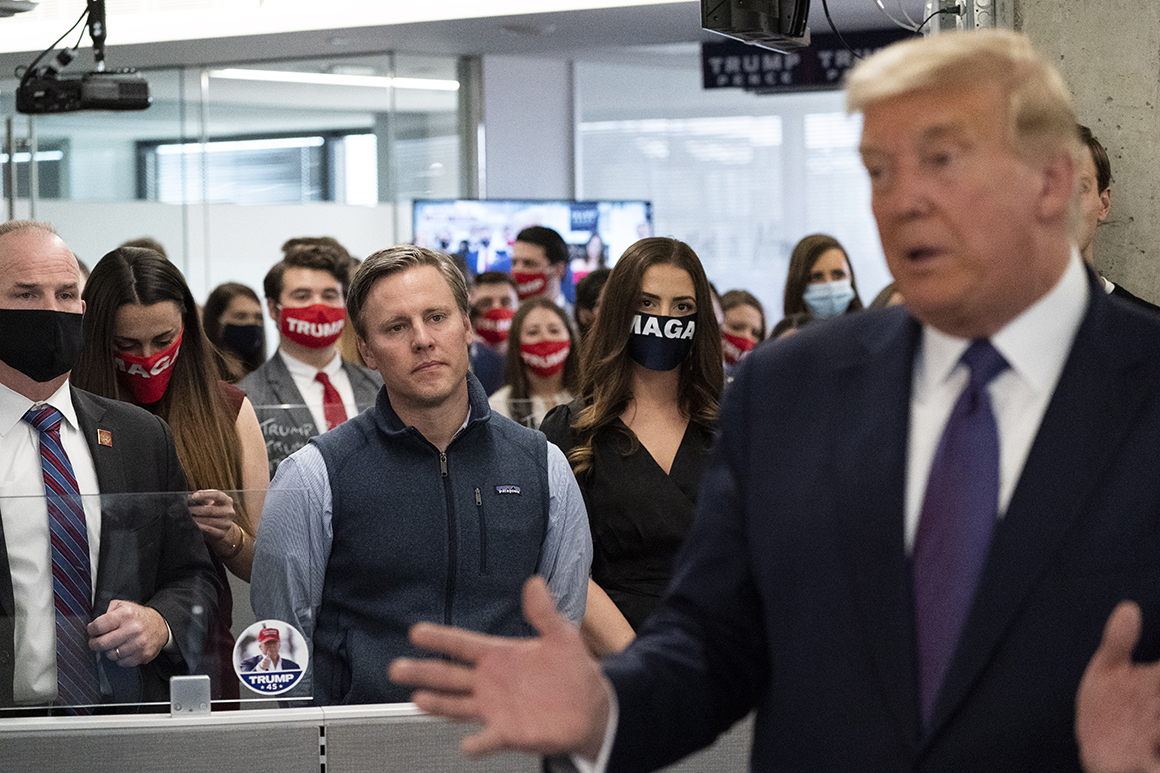 “It was an honest misunderstanding. The poll watcher, I’m told, his certificate had a different ward and division on it than the ward and division of the polling place he was trying to get into. And the judge of election misunderstood the law: He thought they had to match,” said Kevin Feeley, a spokesperson for Philadelphia City Commissioner Lisa Deeley, a Democrat. “The poll watcher was admitted. As far as I know, he’s there now.”

Throughout the election, Trump has stoked fears about election security in Philly as well as mail-in voting across the country — all without evidence. At one of the debates, he said, “Bad things happen in Philadelphia.” The deep-blue city is a font of Democratic votes for candidates in Pennsylvania, the likely tipping-point state in the Electoral College.

Roman’s post had racked up over 1,700 retweets on Twitter as of Tuesday afternoon, sparking a slew of unsubstantiated allegations online that a campaign to steal the vote away from Trump was afoot. The original clip of the incident, posted along with the hashtag #StopTheSteal by right-wing activist Will Chamberlain earlier Tuesday, has been retweeted more than 28,000 times.

“It’s unfortunate that people, they want to make more of it than it is,” Feeley said.

Roman separately shared a post alleging that a sign urging voters to cast their ballots for Democrats outside of a polling station was in violation of laws against electioneering. “Bad things are happening in Philly,” he wrote.

But Philadelphia Democratic District Attorney Larry Krasner’s office called the tweet “deliberately deceptive.” The DA’s office said it investigated the incident and found that the sign was not in violation because it was placed more than 10 feet from the polling location inside the building.

Hours after some of the tweets were posted, Twitter added notices to three of Roman’s missives from Tuesday suggesting widespread voter fraud in Pennsylvania. The labels directed users to the social media company’s election integrity policies, but did not fact-check his statements.

Twitter also added a fact-checking label to a fourth post by Roman that alleged a voter was caught on camera “STUFFING the ballot box in Philly.” An overlay placed over the post called the statement “disputed,” adding that it “might be misleading about an election or other civic process.”

Twitter in September said it would begin to label or take down false or misleading posts “intended to undermine public confidence in an election or other civic process.” The Chamberlain post had not received a label as of late Tuesday afternoon.

Emerson Brooking, resident fellow at Atlantic Council’s Digital Forensic Research Lab, said one-off issues like this in Philly will likely receive outsize scrutiny in part because the state could take days to count all of its mail ballots.

“The fact that we are unlikely to know the result of that pivotal race tonight means that I think any incidents will receive disproportionate attention because there won’t be a resolution to the race,” Brooking said. “So it will continue to be a topic of heated debate in the days to come.”