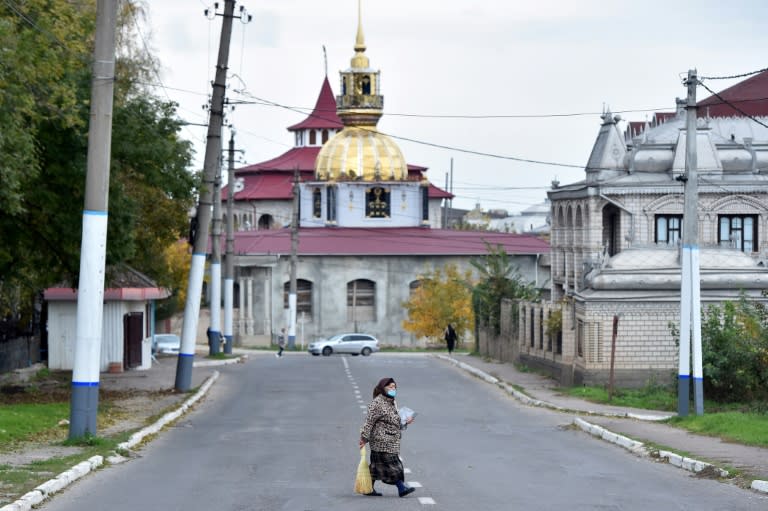 Extravagant mansions once owned by wealthy Roma stand in stark contrast to the modest traditional homes of Soroca in northern Moldova.

In a district known as “Gypsy Hill”, members of the Roma community built houses resembling Moscow’s Bolshoi Theatre or the US Capitol in Washington to flaunt their wealth in one of Europe’s poorest countries.

But many of these palatial homes are now abandoned after their owners left the town of some 22,000 people in search of a more prosperous future.

“The owners have died or gone overseas,” says Sandu, an elderly man sitting on a bench outside one of the striking buildings.

Their diverse architectural styles mirror destinations the community has historically lived in search of work.

Artur Cerari, who describes himself as the son of a “Roma baron”, says his people have settled in countries across the post-Soviet space.

“From 1999 they starting going to Russia, then from there further on to Kazakhstan, Uzbekistan, Turkmenistan and Azerbaijan,” Cerari, 41, tells AFP standing in front of a building with a golden dome and a minaret that resembles an Azeri mosque.

An austere grey building fashioned after a Greek temple stands across the street, and an exact copy can be found in the same area, Sandu says.

He explains that the owner built two identical houses for his daughters who have both emigrated.

“If you go to the right you will see a replica of the Hermitage in Saint Petersburg. On the other side you have the Bolshoi Theatre,” intervenes a young man, Alin.

Of the thirty or so grand homes that make up the neighbourhood only have handful are now being lived in, he says.

Construction on some began in the 1980s when Moldova was still part of the Soviet Union. Other more recent mansions were never completed after owners ran out of money or left, residents said.

The homes are seen as an expression of “prestige and the success” and are dotted throughout eastern Europe, according to Romanian architect Rudolf Graf.

But in Soroca, the curtains are drawn in most of the huge homes and there are no signs of life.

Cerari hopes the quiet is temporary, and that “God willing, our Roma will return to Moldova”.