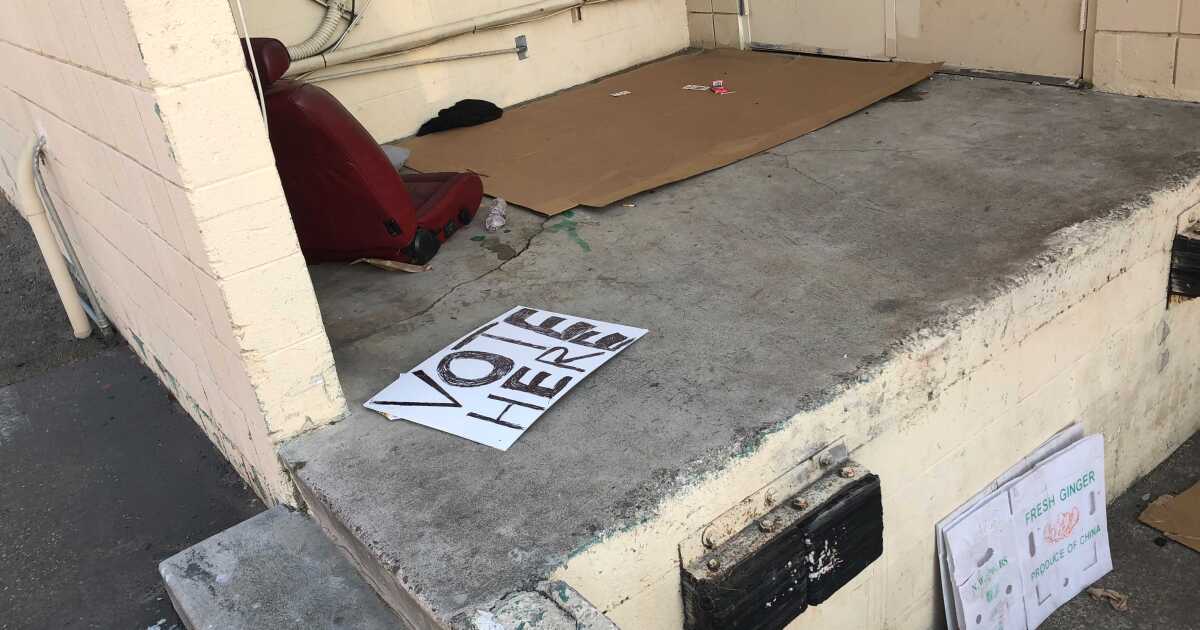 Orange County officials said Tuesday that they were investigating reports that someone established a fake voting center at the headquarters of a City Council candidate in Westminster and accepted ballots and handed out “I Voted” stickers.

Registrar of Voters Neal Kelley said the incident was under investigation by his office and the Orange County district attorney’s office, but wouldn’t comment further. At about 3 p.m., he said officials were “on scene and active right now.”

Video purporting to show the phony voting center was posted on Twitter by Ty Bailey, an organizer with OCForBlackLives, an Instagram account supporting the Black Lives Matter movement. He said activists were patrolling neighborhoods looking for voter fraud — “The orange man said to watch the polls, so that’s what we’re doing” — when an activist spotted a “Vote Here” sign written in black marker.

Shortly after the video was posted, a Times reporter saw the sign discarded behind the building.

Bailey said he saw people walking in with their ballots and then walking out with “I Voted” stickers, which he described as fake. He called the Registrar of Voters office, which confirmed it’s not an official vote center.

The purported voting center was at an address that is listed as the headquarters of Apogee International, a skincare company owned by Kimberly Ho, the vice mayor of Westminster, who is up for reelection to the City Council. A man who answered a phone number for Apogee said that the address was Ho’s campaign headquarters. The man declined to give his name or answer questions about the site’s alleged use as a fake voting center.

“You need to talk with the lawyer,” the man said and would not provide further names or information.

Van Tran, a former state assemblyman who is the attorney for the Ho campaign, acknowledged that people were coming there to drop off ballots.

He also said the office was helping to “advise” voters on how to vote.

The video showed two campaign volunteers with boxes of what the narrator said appeared to be discarded ballots. However, Tran said the boxes contained empty ballot envelopes, not ballots, and Kimberly Edds, Orange County district attorney’s communications director, seemed to confirm that. She said Tuesday evening that the office’s investigators “have found no evidence of ballots being discarded at the location. What is being thrown away is the envelopes ballots come in.”

“It’s a false controversy that the opponents are creating,” Tran said, gesturing to several activists milling about in the parking lot. “There is absolutely no evidence whatsoever that any illegality is happening.”

Tran, a Republican, said this was also an effort by the campaign to help bridge a cultural barrier to voting with the local Vietnamese community.

“Fellow countrymen and countrywomen who speak the language, offering a service that no other government agency provides,” he said.

Activists in the parking lot, which was lined with Trump campaign flags, said they had no relationship with Ho’s campaign opponents.

“I don’t even know who her opponent is,” said Justin Frazier, an activist with Clarity O.C., which describes itself as a grass-roots voter engagement organization. Ho, who survived a recall campaign in April, was running against Tai Do, a police officer who is also on the City Council. Because of redistricting, the two were vying for the same seat on the nonpartisan council.

Last month, a judge halted efforts by state Atty, Gen. Xavier Becerra to investigate the state GOP’s use of ballot drop-off boxes, some of which were briefly, and falsely, labeled as official ballot sites. Sacramento Judge David I. Brown agreed with the Republican Party that the boxes violated no law and posed no threat to voting.