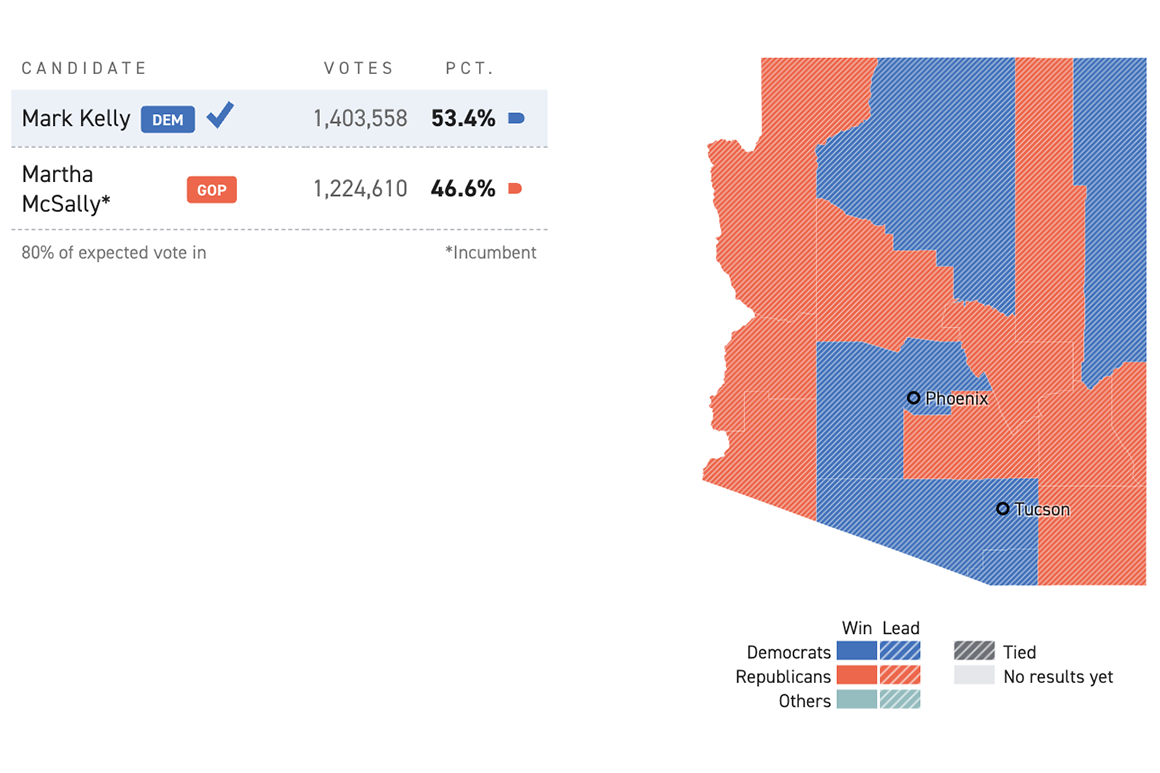 McSally, a former fighter pilot and House member, was appointed to the Senate in December 2018, weeks after losing another close Senate race against Democrat Kyrsten Sinema. Arizona Gov. Doug Ducey named her to the seat after McCain’s death in the hope that she could protect it for the GOP in this year’s special election.

Kelly has never held public office before, but Democrats have wanted him to run for office for years, and he proved himself to be a prolific fundraiser, raising a whopping $90 million through September, while McSally raised $57 million through the same time period.

Prior to running for Senate, Kelly served in the Navy and became an advocate for stricter gun laws after Giffords was shot in a 2011 assassination attempt. McSally served two terms in the House before running for Senate in 2018, losing by 2 percentage points and promptly winning an appointment to the state’s other seat.

There are just two years left in the term McCain won in 2016, and there will be another race for this Senate seat in Arizona in 2022.

Arizona has hurtled onto the scene as a battleground state in recent years after a big demographic shift, with a growing Latino population, migration from California and changing party allegiances among college-educated white voters all combining to loosen the GOP’s hold on the state.

During the race, Kelly likened McSally to Trump, who lost ground in a state he won by almost 4 points in 2016, while McSally tried to tie Kelly to more liberal members of the Democratic Party.

As a senator, McSally has aligned herself closely with the president. But at times, she attempted to distance herself. At a debate in October, McSally declined to say directly whether she was proud to support Trump, and instead said that she was “proud to be fighting for Arizona every single day.”

Like in other Senate battlegrounds, much of the race focused on the Trump administration’s response to the coronavirus pandemic, as well as the candidates’ broader positions on health care. McSally criticized Kelly for supporting a public health insurance option, while Kelly chastised McSally for voting to repeal the Affordable Care Act while she was in the House.

McSally vowed to protect pre-existing conditions, though Kelly said the promise was hollow given McSally’s support for GOP legislation that would have done away with those protections.