John Elway, the football Hall of Famer and Denver Broncos general manager, has tested positive for the virus. 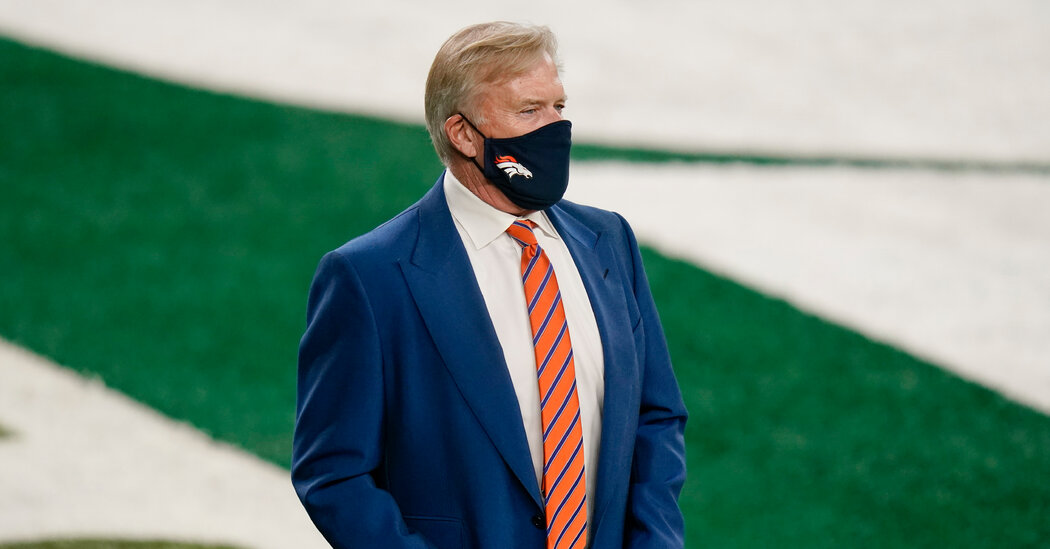 John Elway, the former Denver Broncos quarterback who is now the team’s general manager and president of football operations, has tested positive for the virus, along with the team’s president and chief executive, Joe Ellis, the team said in a statement on Tuesday.

Mr. Elway had been at UCHealth Training Center, the Broncos practice facility, on Monday morning, but left “after experiencing minor symptoms that he quickly brought to the attention of our medical staff,” the statement said. Mr. Elway retired in 1999 after winning two straight Super Bowl victories with the Broncos. He was inducted into the Pro Football Hall of Fame in 2004.

Mr. Ellis did not feel well on Sunday morning and watched Sunday’s game against the Los Angeles Chargers from home, the team said, and then worked from home on Monday.

The team said that both men were experiencing only mild symptoms and would continue to work from home in isolation.

“Based on a review of contact-tracing data with the league, we are confident these cases originated independently outside team facilities,” the team said, adding that the two men had “minimal close contacts,” none of whom were players or coaches.

“It’s certainly a concerning situation for us,” Dr. Allen Sills, the N.F.L.’s chief medical officer, said on Tuesday. “We know that there are areas of the country where it is spiking and increases vulnerability.” He added that the league had not seen positive cases on teams rise as quickly as in the general populace.

Colorado, which once looked like it had gotten a grip on the coronavirus, has slipped. Daily reports of new cases are soaring to record heights, and the number of patients hospitalized with Covid-19 has tripled since early September.

The Colorado Department of Public Health and Environment is now warning that hospitalizations in the state are likely to blast through the peaks of last April and could overwhelm the state’s intensive care units by January. The department estimated that one in every 219 people in Colorado is infectious.

“It’s really a very scary rise,” Dr. Jonathan Samet, the dean of the Colorado School of Public Health, said in an interview. “Clearly, Coloradans have lapsed.”