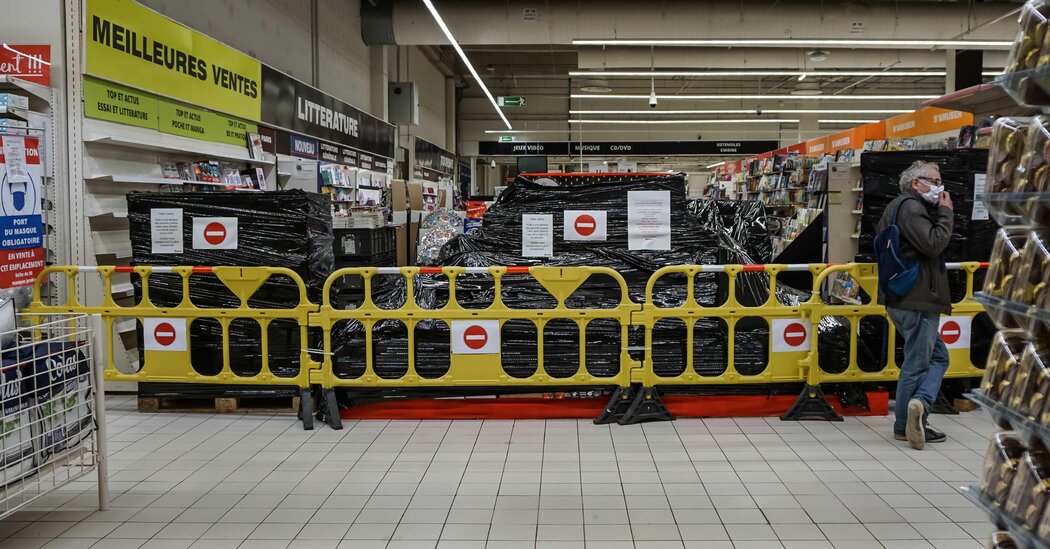 Instead, the measures have ignited a nationwide backlash. Small businesses are revolting against what they say is unfair competition from dominant retailers — especially Amazon — that continue to sell items the shopkeepers can’t. Politicians and trade groups have joined the outcry, forcing President Emmanuel Macron’s government to scramble to come up with a new game plan.

On Tuesday, the government announced its solution: Supermarkets such as the retail giant Carrefour were given until Wednesday morning to drape giant plastic tarps over items considered nonessential, including books, clothes, toys, flowers and even dishes, to put them off-limits to consumers during the monthlong lockdown. Since smaller stores can’t sell such items, the thinking goes, big stores shouldn’t be allowed to, either.

Electronics retailers including Fnac, a large French retail chain, must rope off videos, books, televisions and other items deemed “not essential” for teleworking from home.

The order set off a fresh round of chaos and confusion, as small businesses chomped at the bit to open anyway.

Operators of so-called hypermarkets — supermarkets that also sell clothing and other nonfood items — complained that the rules made no sense.

“It’s a mess,” Michel-Edouard Leclerc, head of the E.Leclerc supermarket chain, wrote on Facebook Tuesday. “In all the hypermarkets of France, thousands of products must be removed from the shelves in two days. And the list of authorized products is still unclear.”

As for Amazon, the French government isn’t imposing any restrictions. But Amazon France agreed to cancel its pre-Black Friday ad campaign after Agnès Pannier-Runacher, the minister for industry, called it “inappropriate at a time when 200,000 merchants are having to close their doors.”

“To the French I say, perhaps during this month of confinement, delay or postpone purchases rather than order them on a large foreign site,” Prime Minister Jean Castex said on TF1 television, avoiding a direct reference to Amazon.

The mayor of Paris, Anne Hidalgo, was more blunt: “I’m really imploring Parisians: Do not buy on Amazon,” she said on French radio Monday. “Amazon is the death of our bookstores and our neighborhood life.”

The brouhaha in France mirrors difficulties that other European governments are facing as they try to enforce a second round of shutdowns amid pandemic fatigue — and find that it is not as easy as the first time.

Protests broke out in Italy last week after the government ordered restaurants, bars and gyms to close at 6 p.m., and small businesses warned they were on the verge of bankruptcy. In Belgium, officials ordered big retailers to stop selling nonessential items after independent shopkeepers also complained of unfair competition.

And in Britain, Prime Minister Boris Johnson has faced a mutiny from members of his Conservative Party who said he went too far with measures to stem a second wave of the coronavirus.

The resistance makes it harder for European leaders to strike a balance between curbing an alarming rise in infections, hospitalizations and deaths before winter sets in, and preventing a fresh economic calamity linked to new closings and health restrictions.

France is already suffering one of the worst downturns in Europe. While the current lockdown is less stringent than the total confinement in the spring, it is expected to knock the economy into another recession after a mild recovery in summer, according to forecasts issued this week by the International Monetary Fund.

By contrast, Germany, where the virus has erupted anew, implemented what Chancellor Angela Merkel this week called “lockdown light,” closing restaurants and bars for a month starting Monday, but letting stores stay open to keep the economy moving.

That is precisely what French businesses are demanding. Many small businesses in particular were hard hit by the first lockdown and never fully made up for lost sales after the economy reopened in May. A large number of smaller firms are believed to have become zombie firms, staying afloat mainly because of government aid programs aimed at delaying a wave of bankruptcies.

France is trying to encourage smaller firms to speed up a transition to online sales as a way of making up for the bleeding, by pushing so-called “click and collect” activity where customers can order online and come collect their own package.

But many smaller shops don’t have the resources to follow through, let alone compete with organized bigger retailers that have a pickup and delivery infrastructure in place.

The fear is that those dynamics will continue to favor Amazon, which has been a big winner in the pandemic. Global sales surged 35 percent in the first nine months of the year to $260 billion. Amazon had over 20 percent of the e-commerce market in France in the third quarter, the biggest share of any online seller, according to Kanter Group, a data consulting company.

Amazon warehouses in France haven’t yet seen a surge in activity linked to the current lockdown, said Jean-François Bérot, a representative of Sud-Solidaires, a labor union representing Amazon workers.

He said people would probably start to shop at Amazon more after the large stores begin cordoning off items deemed nonessential by the government.

Warehouse workers in France won’t agitate to compel Amazon stop selling nonessential items, as they did when the coronavirus first broke out and workers were worried about getting infected, he added.

“Since the government wants the industry to keep working, we won’t get a reduction of activity even if we ask for it,” he said.