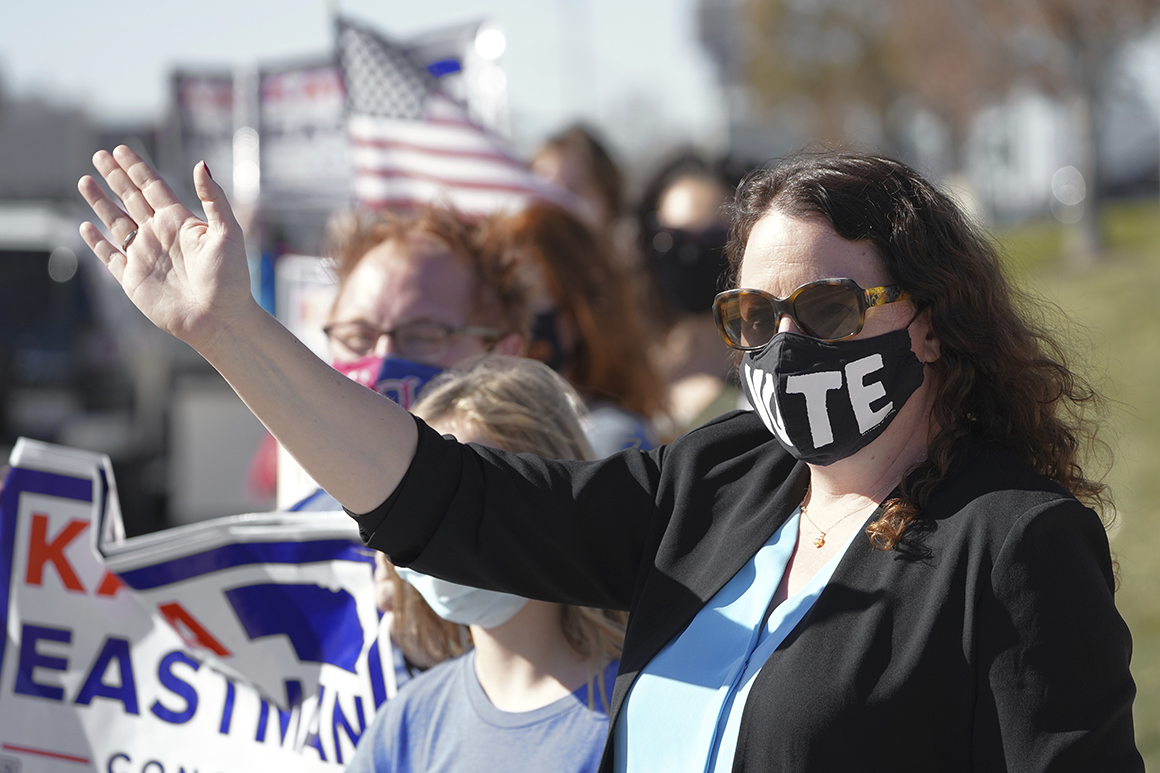 “This is the most consequential election of our lifetime,” Pelosi told reporters as millions of Americans headed to the polls Tuesday.

In districts across the country, Democratic candidates centered their 2020 message on the dueling national crises as they hammered their GOP opponents on health care and the economy, in many ways mirroring the party’s campaigns from their successful bid to recapture the House in 2018.

But this time — with an enthusiastic base, Trump’s sinking popularity and a wave of GOP retirements — Democrats expect to charge even further into Republican strongholds. The left’s massive small-dollar fundraising machine enabled Democratic candidates to outspend their Republican counterparts on TV by a nearly 2-to-1 margin.

“I think we are going to see some wins in these deep-red districts that over time you’re going to see go from ruby red to purple to even blue,” Democratic Congressional Campaign Committee Chairwoman Cheri Bustos (D-Ill.) told reporters in a briefing Tuesday morning, “and I think that will be the story out of tonight’s election.”

House Minority Leader Kevin McCarthy (R-Calif.) and National Republican Congressional Committee Chairman Tom Emmer said from the start of the election cycle that they can still reclaim the majority. Privately, many Republicans think a wash is the best-case scenario, but they are hopeful that they will knock down some Democratic incumbents in Trump country.

“Our guys are all in the fight,” Rep. Tom Cole (R-Okla.), a former NRCC chairman, said in an interview last week. “Where we can control things. we’ve done a good job. Obviously our fate is tied to the president but I think he has a little bit of momentum right now.”

Democrats built their House majority in 2018 with victories in red-hued districts, and they must defend a number of them Tuesday — though it’s possible they only lose a handful of incumbents tonight. Among the most endangered Democrats: Reps. Max Rose on Staten Island and Xochitl Torres Small in Southern New Mexico; and House Agriculture Committee Chairman Collin Peterson in Western Minnesota. Recruitment flops and lackluster fundraising kept the GOP from contesting other favorable seats in places such as Michigan, Maine and central New York.

Trump’s unpopularity in the affluent, well-educated rings around major cities opened up dozens of offensive opportunities for Democrats from Indianapolis to St. Louis to Cincinnati. Texas is teeming with opportunity for the party — they are targeting ten seats in the state this cycle.

Like in 2018, Democrats assembled a diverse coalition of candidates, with more women and people of color on the ballot than any time in history.

This year, there are only five white men on the DCCC’s 38-strong list of top challengers. Two years ago, white male candidates made up nearly 40 percent of their target seats.

Democrats are practically guaranteed to pick up at least two seats tonight in North Carolina, where court-ordered redistricting created two new Democratic districts. Kathy Manning, an immigration attorney who also ran for Congress in 2018, is likely to win a Greensboro-based seat, while Deborah Ross, the 2016 Senate nominee, is likely to prevail in a new Raleigh-area district.