Bertens struggled with cramps as the final set developed, eventually sinking to the clay in relief and pain following her 7-6 (7-5), 3-6, 9-7 victory, which took three hours and 11 minutes.
The Dutchwoman had to overcome a 5-2 deficit and save a match-point in the third set while struggling with cramps that became so bad she needed the wheelchair at Roland Garros.
Errani, who appeared to mock Bertens’ cramp during the game, left the court without tapping racquets at the net as is customary, and also shouted an obscenity as she departed.
“After one hour, she’s injured but then she’s running around like never before,” Errani, runner-up at the French Open in 2012, told the media.
Read More
“She leaves the court in a chair and now she’s in the locker room and eating in the restaurant, perfect. She exaggerated. It made me very angry. So, well done to her, but she can win without doing that.”
READ: ‘Wouldn’t give to a dog to chew’: Tennis players complain about new balls at French Open 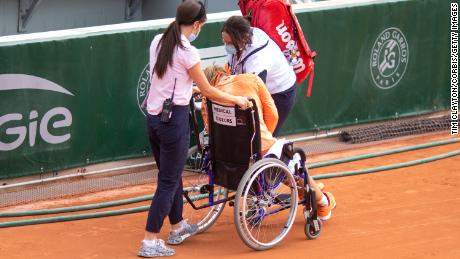 For the clay-court expert Rafael Nadal, it was more of the same Wednesday.
The Spaniard dropped just four games as he breezed past American Mackenzie McDonald to advance to the third round, winning 6-1, 6-0, 6-3.
It took Nadal just 35 minutes to win the first set and, after breaking McDonald’s opening service game of the second set, he dominated the match.
The 34-year-old faced zero break points and hit only 15 unforced errors. 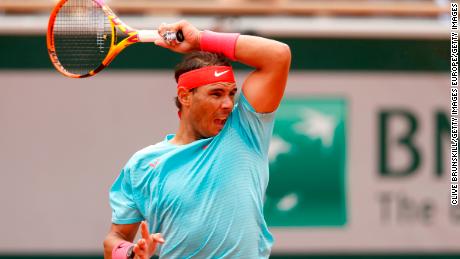 “I am just trying my best every single day. I am working hard in every practice to try to be better and better in every match,” Nadal said. “Today was not that cold, so that’s the main thing. Not that cold, the conditions are not that bad.”
Nadal has won the French Open a record 12 times and has lost only two French Open matches since 2005.
Visit CNN.com/sport for more news, features, and videos
The 19-time Grand Slam winner is aiming to lift the trophy for the fourth year in a row.
The world No. 2 will face Kei Nishikori or Italian Stefano Travaglia in the next round.