Also on the ballot: The future of the Trump political dynasty 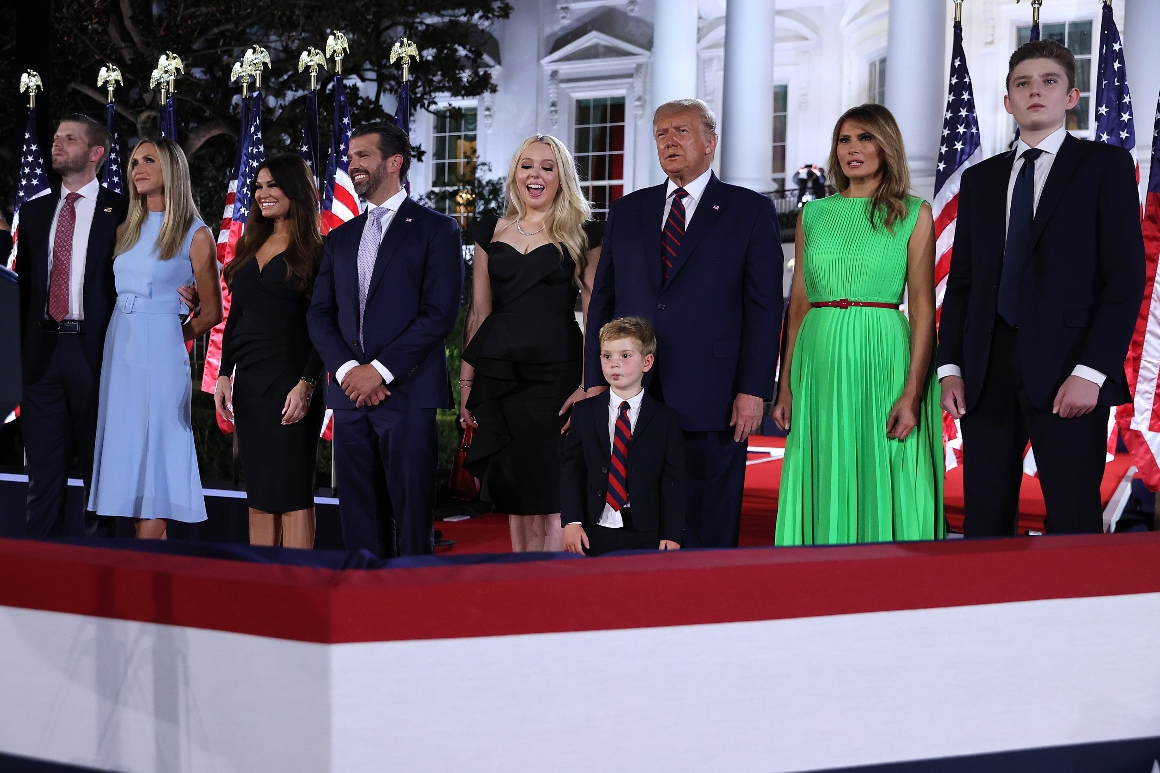 Election Day is here. The results? They might not be finalized for a while. And that has lawyers for Trump and Biden preparing for lawsuits, recounts and some odd scenarios that you might never have thought of.

If Trump pulls off another upset win, it will cement his family’s standing in American society. The Trumps will set the cultural and political dialogue for the better part of a decade. They’ll continue to elbow their way through the halls of Washington and the GOP. They might run for office.

But if Trump loses, a family brand built on “winning” will be dealt an embarrassing defeat after years of successfully side-stepping creditors, bankruptcies and cultural comeuppance. Republicans might turn on the Trumps. MAGA politics may fade. And the Trumps likely can’t retreat back into the glitzy world of New York galas. Nor do they want to. Instead, they’ll try to do what they always do, according to over a dozen current and former senior administration officials and close associates of the Trump family: Keep the Trump brand alive. Expand the family business. Export it when possible.

“It will be a rush to cement their future and be back at the center of power,” said Kate Andersen Brower, author of “Team of Five: The Presidents Club in the Age of Trump,” about former presidents and their families. “Once you get a taste of it, it’s hard to leave.”

Few have benefited more from Trump’s political ascent than his children and their partners. The perch of the White House has exposed the Trump kids to Republican politicians, donors and voters. It fostered potential political aspirations, while giving the family company greater global exposure and contacts. It also, of course, created numerous questions about conflicts of interest.

If Trump wins, it will turbocharge these connections and aspirations, not to mention the concerns about ethical conflicts. But if Trump loses, his family’s fate will become tied to how voters, and the Republican Party, respond to the election. One possible post-Trump presidency project that has been regularly floated for the family is a Trump-branded media empire. But no one in the Trump orbit sees that as a realistic possibility — for now.

“The big question, which they do not have control of is: Does the Republican Party pretend Trump never happened, or is everyone still afraid of his hold on the electorate?” one former senior administration official said of a Trump loss. “Or is he still the de facto head of the party? If he is still the de facto head, they are fine on a variety of levels.”

Of Trump’s family, Kushner and Ivanka Trump are the two who used Trump’s win to actually take government jobs, both as senior White House aides. Over the course of four years, they have parlayed those roles into new relationships and friendships with world leaders, tech executives, financiers and political activists. Friends and allies said they do not expect them to simply drop those expanded networks — like the ability to call Facebook’s Mark Zuckerberg at any time — and resume their old lives in New York.

Ivanka Trump will not start another shoe company, for instance, while Kushner is unlikely to feel satisfied by his family’s own real estate business unless he took it more global, said allies of the couple.

The couple spent copious amounts of time in the White House reaching out to business executives, traveling on high-profile international trips even when their portfolios did not necessarily warrant their presence. They’ve also used their perches to schmooze and dine with executives like Oracle CEO Safra Catz, Saudi Arabian Crown Prince Mohammed bin Salman and members of the British royal family.

“A big part of their time in the White House was connecting with Fortune 100 CEOs, but especially in areas where they were interested in or had future business,” said a second former senior administration official. “They would host dinner parties at their home in D.C. or get together with folks like [Apple CEO] Tim Cook for dinner at Bedminster or Mar-a-Lago. More so than most in the administration, they sought to capitalize on the social aspect of things. Most of the rest of the senior staff had overwhelming responsibilities, which meant they had to be working most of the time.”

An administration official predicted the pair would “probably capitalize on [Trump’s] popularity in different parts of the world. For instance, you could see Trump Tel Aviv, Trump Jaffa, Trump Jerusalem, Trump Riyadh.”

The official said a question has lingered over some of his conversations with the couple: “Will things go back to ‘normal?’”

“Will I go to the Hamptons, or Silicon Valley, or you name it?” the person said. “My sense is that it’s going to be very difficult to go back to that life domestically, but there will be extraordinary new opportunities in the international space.”

Kushner and Ivanka Trump present themselves much differently now than before their father entered politics. Whereas the duo once spent time in New York’s Democratic circles, they now call themselves proud Trump Republicans. Ivanka Trump recently declared herself “unapologetically” anti-abortion, a major change from her earlier attempts to appear as a moderating force inside her father’s orbit. Kushner has adopted an increasingly Trumpian tone during his rare TV appearances.

Then there’s the question of public office.

The Trump kids have denied such ambitions for now, even though they have had a meteoric rise as marquee names for Republican fundraisers and events. Ivanka Trump, for example, raised over $35 million for her dad’s reelection, and reportedly broke Barack Obama’s record for fundraising in a single day.

“All of these kids have developed extensive personal relationships with the most powerful forces in the Republican movement and not just politicians but big donors,” said one Republican fundraiser and close friend of the Trump family. “When you want to speak with someone in the family and you’re a donor, the best you’re going to get is the kids. [Trump] brought all these people into the Republican fold, and the Trump kids stand to benefit from that following in their own ways.”

While Kushner and Ivanka Trump have ingratiated themselves with CEOs and elite Republican donors, Donald Trump Jr. has successfully captured the zeitgeist of the Trump movement.

Of the Trump family members, Trump Jr. is the most fluent in MAGA internet culture, making him popular with youthful, energetic Trumpers. That’s left Trump Jr. the most poised to take up his father’s mantle if he loses. Still, Trump Jr.’s friends said he would likely return to his previous day job with the Trump Organization if his father is ousted. From there, he would continue putting a Trumpian mark on the conservative movement, wielding influence on red meat cultural issues from his Twitter and Instagram accounts, where he amplifies conservative and far-right voices.

“Don Jr. is the id of the conservative movement and that’s why they love him,” said a person close to him. “It’s highly unlikely you’ll see him running in 2024 for anything, but these days in a lot of ways you can have a lot more influence from the outside. Who do you think is more influential, Tucker Carlson or Lindsey Graham? I think the answer is pretty obvious.”

A Trump loss might also leave his children with a tough political future, even if they remain influential, according to government watchers.

“The election could determine the Trump children’s own political fortunes,” said Barb McQuade, a former U.S. attorney for the Eastern District of Michigan and frequent commentator about Trump on MSNBC. “If Trumpism prevails again, it becomes more established in our political fabric and paves the way for an heir apparent, such as Donald Trump, Jr. or Ivanka Trump. We could see one or both of them run for office in the momentum of their father.”

“If Trump loses, then that could portend an end to the politics of division, which would be a roadblock to political aspirations of the Trump children,” McQuade added.

Financially, Trump’s four years in the White House have offered a lifeline for parts of his family businesses. Trump’s D.C. hotel has been a hotspot for Republicans, foreign governments and conservative organizations, generating tens of millions in revenue. And following Trump’s upset win in 2016, donors and wealthy Republicans rushed to join some of Trump’s resorts, like Mar-a-Lago, which hiked its membership fee. Separately, Trump’s frequent travel to his own properties has funneled millions in government spending to the Trump Organization.

Citizens for Responsibility and Ethics in Washington, a nonpartisan government watchdog group, estimates special interest groups have spent roughly $13 million at Trump businesses since he took office, with 137 events hosted or sponsored by groups trying to curry favor with the administration.

Overall, however, Trump’s businesses have performed unevenly during his presidency, as the president’s toxicity turned off some potential customers.

“The whole Trump family has mixed their business with government service. They are going to come out absolutely fine regardless of how the election goes,” said Craig Holman, a government affairs lobbyist at the government watchdog group Public Citizen. “The bottom line is: For all of the kids, four years in government service brought them enhanced prosperity. None of them have been worse off.”

The outcome of Tuesday’s election is also unlikely to change the potential legal exposure Trump’s kids may face from the ongoing investigations into the Trump Organization. Eric Trump recently had to sit for a deposition as part of the New York attorney general’s probe into whether the Trump Organization overstated the value of its assets as it sought loans and tax breaks.

“Win or lose, their father and head of their company will remain a powerful man. Win or lose, no one will be the least bit surprised by a grant of broad pardons to all them,” said Sam Buell, a former federal prosecutor who worked with Robert Mueller deputy Andrew Weissman on the Enron prosecution. “Of course anyone would rather have the sitting president of the United States on their side while under investigation, and that could have a lot impact on probabilities. But the outcome of this election will not itself determine their legal fates.”

Kyle Cheney contributed to this report.