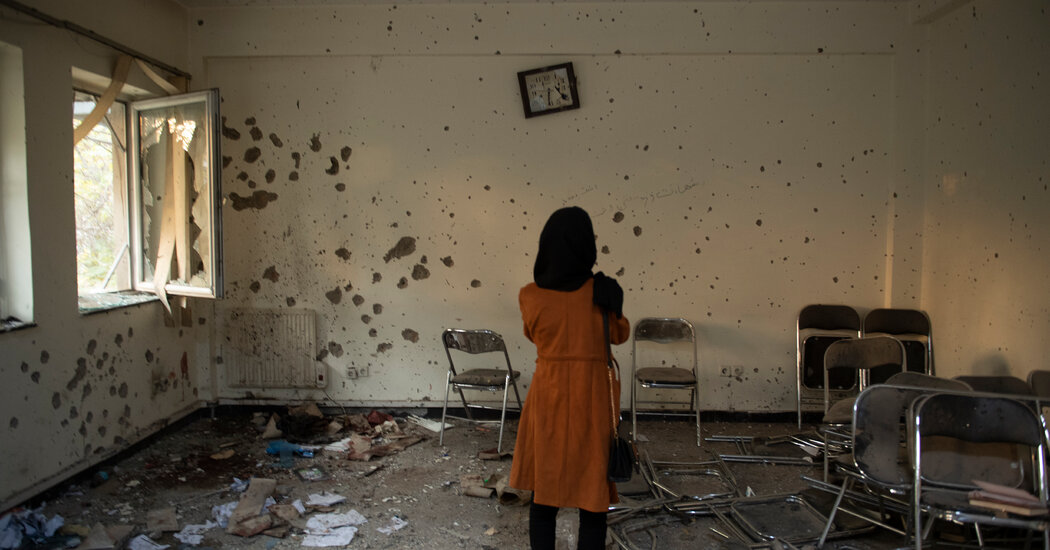 The following report compiles all significant security incidents confirmed by New York Times reporters throughout Afghanistan from the past seven days. It is necessarily incomplete as many local officials refuse to confirm casualty information. The report includes government claims of insurgent casualty figures, but in most cases these cannot be independently verified by The Times. Similarly, the reports do not include Taliban claims for their attacks on the government unless they can be verified. Both sides routinely inflate casualty totals for their opponents.

At least 37 pro-government forces and 76 civilians have been killed in Afghanistan the past week. In Kabul, three ISIS gunmen laid siege to Afghanistan’s largest university on Monday, taking hostages, killing at least 22 people and wounding 27, officials said. Other sources said at least 32 civilians and one police special unit member were killed, and 47 civilians were wounded. It was the second deadly assault with mass casualties on an education center in the capital in just over a week. In Kandahar Province, the Taliban conducted coordinated assaults in three different districts — Arghandab, Zari and Panjwai — resulting in the deaths of at least 25 civilians. Another 222 were reportedly injured in the attacks. Reporting from the area was sporadic, so it is unclear which day the casualties occurred. Officials claimed more than 100 Taliban fighters were killed. A Taliban attack, most likely carried out by a drone, killed at least four security officers in Kunduz Province on Sunday, according to senior and local Afghan officials, representing what could be the group’s first publicly known use of the method in the 19-year war.

The father of one of Afghanistan’s female mayors, Zarifa Ghafari of Maiden Shahr in Wardak Province, was shot and killed in front of his home by unknown gunmen in Kabul City’s 12 Police District. He was an Afghan army colonel who worked the Ministry of Defense.

The Taliban attacked a security outpost in Tarin Kot, killing one police officer and wounding seven others before overrunning the outpost. At least three districts in the province are under attack by Taliban forces.

The Taliban shot and killed a female police officer in Kohsan District.

A bomb attached to a pro-government militia vehicle exploded in the First Police District in Mahmod Raqi, the provincial capital, killing a militia commander.

One territorial army soldier was killed and two others were wounded when a roadside bomb exploded in Khuram O Sarbagh District.

The Taliban attacked a memorial ceremony in Ali Abad District, killing a father and his son and wounding one another.

One local police officer was killed during a Taliban attack on a security outpost in Chardara District. The Taliban were pushed back from the area.

A missile fired by Afghan security forces in Khanabad District killed one civilian and wounded 17 others.

Two members of a police special forces unit were killed and one another was wounded when the Taliban attacked an outpost in the Chashma-e-Shir area of Pul-e-Khmri Pul-i-Khumri, the provincial capital.

One local police officer and one pro-government militia member were shot and killed by Taliban marksmen in Qadis District while they were patrolling their outpost.

During a Taliban attack in Khanabad District, two pro-government militia members were killed.

Three police officers were killed, and two others were wounded when their vehicle was hit by a roadside bomb in Ab-Kamari District.

A missile fired by the Afghan security forces hit a house in Khanabad District, killing five civilians and wounding two others.

The Ministry of Interior said 22 people were killed and 27 others were wounded when three ISIS-K fighters stormed the National Legal Training Center of Kabul University. Other sources said at least 32 civilians and one police special unit member were killed, and 47 civilians were wounded. The three assailants were killed after Afghan security forces and American troops moved to root them out, ending the siege after six hours, the Interior Ministry said.

A military prosecutor of Wardak was shot and killed by unknown gunmen in Kabul City’s 15th Police District.

The Taliban conducted coordinated assaults in three different districts — Arghandab, Zari and Panjwai — resulting in the deaths of at least 25 civilians. Another 222 were reportedly injured in the attacks. Reporting from the area was sporadic, so it is unclear which day the casualties occurred. Officials claimed more than 100 Taliban fighters were killed.

Brig. Gen. Abdul Wadood Najrabi, the commander of a Takhar border army regiment, and one of his bodyguards were killed and five soldiers were wounded by a roadside bomb in Khanabad District.

A religious scholar was shot and killed by the unknown gunmen on a motorbike in Gozarah District.

A civilian was killed when a roadside bomb exploded in Bagrami District.

Taliban carried out an attack on the governor’s compound by a drone in Kunduz City, the provincial capital, killing at least four security forces and wounding three others.

Three police officers were killed and two others, including one civilian, were wounded when a police outpost exploded in Herat City’s 10th Police District. The cause of the blast was not immediately known. An investigation is underway.

A police officer was shot and killed by unknown gunmen in Herat City’s Ninth Police District. The attackers fled the area.

The Taliban planted a bomb in a tunnel under a military base in Balkh District, killing two soldiers and wounding five others.

A police officer was killed and the Kapisa police chief was wounded when a roadside bomb hit their vehicle in Ala Sia District.